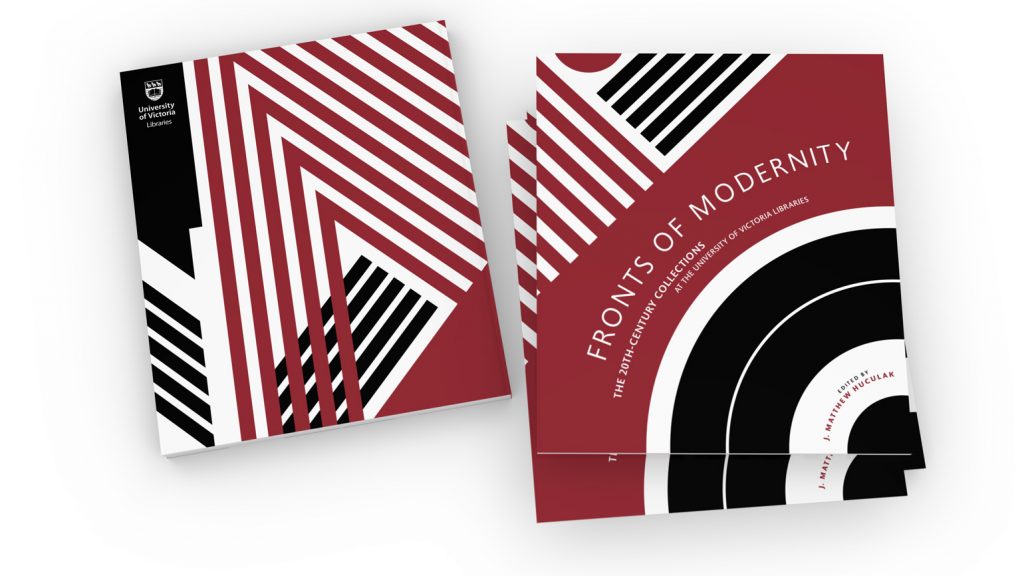 Fronts of Modernity: The Twentieth-Century Collections at the University of Victoria Libraries, by UVic associate professor J. Matthew Huculak, has been reviewed in the Victoria Times Colonist by Robert Amos.

A new book entitled Fronts of Modernity is the fourth volume published by and about the University of Victoria’s libraries. It was created by assistant professor Matthew Huculak, who was assigned the task by university librarian Jonathan Bengtsen in honour of the 50th anniversary of the university’s Special Collections and Archives.

Who knew that UVic was so richly endowed with original source materials of literary modernism? When UVic and Simon Fraser University were founded in the 1960s, the three university libraries in the province strategized their collecting activities.

Simon Fraser concentrated on the U.S.; the University of British Columbia chose to specialize in Canadian literature; and UVic focused its attention on Britain. Librarian Roger Bishop was enthusiastic, literary lion Robin Skelton used his influence and a plucky young professor of English named Ann Saddlemyer took to the field. With good luck, good connections and a winning personality, Saddlemyer landed in the centre of a field that at the time was not properly appreciated.

Last spring, I reviewed an exhibit of the library’s holdings of W.B. Yeats and his family, amassed for the university in its early days by Saddlemyer. About that time, a filing cabinet full of papers from Britain’s poet laureate John Betjeman came to Victoria, and had to be properly looked into.

Reading this new book, I discovered that Victoria also has correspondence between Herbert Read and T.E. Lawrence “of Arabia”; important proof editions of the writings of Lawrence Durrell; and many original watercolours by Henry Miller.

An extraordinary gathering of materials by and relating to Wyndham Lewis, which was assembled by Cyril J. Fox over a lifetime, has already drawn scholars to Victoria. Letters and first editions by T.S. Eliot, Djuna Barnes and Virginia Woolf also have a home here, and there is an unexpectedly large cache of rare editions and early publications of James Joyce awaiting the attention of scholars.

This is Huculak’s particular field of interest, and since coming here, he brought to light the original files and photographs for the picture book James Joyce in Paris, by the mid-century literary photographer Gisèle Freund, who was based in Paris from 1933 to 1967. Such are the treasures waiting to be examined by UVic scholars.

Fronts of Modernity was beautifully designed by Clint Hutzulak at Rayola Creative, and the look of the book alone makes it worthy of note in this art column. Hundreds of colour illustrations presented in an engaging layout give us a sense of the stationery, the postmarks and handwriting in these gems of correspondence.

For example, we are shown a letter from Ezra Pound typed in blue on his block-printed stationery from Rapallo, Italy. This page includes a first draft of one of his poems which has been extensively amended by the author with a fountain pen. With the advent of word-processing and email, these sorts of artifacts represent forms of communication from another age.

Fronts of Modernity, ed. Matthew Huculak (University of Victoria Libraries, Victoria 2016, 144 pp.) is not for sale in shops, but can found at the UVic Library, or can be accessed as a pdf file at no cost. Just go to https://bit.ly/2dekrWG